It is with great sadness that I start this WTA wrap-up by acknowledging the passing of Elena Baltacha. The former British #1 player, who reached her WTA career high ranking of #49 in 2010, lost her battle with liver cancer. She was 30 years old. At 19, Elena was diagnosed with primary sclerosing cholangitis, an inflammatory and autoimmune disease of the liver that can result in several liver conditions, including cancer. Elena retired from tennis in November 2013, marrying Nino Severino shortly thereafter. Sadly, a few weeks following that marriage, in January of this year, she was diagnosed with liver cancer. She passed away only a few months later in the early morning, May 4th, 2014. There were some fans through the years that were very negative towards Bally, thinking she should have accomplished more. I contend that when one considers she played her entire career with a chronic liver condition and its autoimmune and inflammation issues, I’d say she overachieved. While she never won a WTA level event, she did win 11 ITF Circuit events, her final one being the 2013 Aegon Nottingham Challenge.

In addition to her own singles play, Bally was committed to representing Great Britain in team and international events. She was a Fed Cup member, breaking down in tears when she learned she had made the 2012 British Olympic team. Her parents were both Olympians for Russia. Bally was born in Kiev, Ukraine but moved with her family to Ipswich, England before settling in Perth, Scotland when she was five years old. She would attend high school in Paisley, Scotland. She continued her family’s Olympic tradition. In addition to participating in Olympic competition, she also carried the torch for a leg of its journey to London.

Bally was also committed to passing on the game to children, opening the Elena Baltacha Tennis Academy and being active in visiting schools to teach the game to the next generation of players. Additionally, she also was a patron of the Children’s Liver Disease Foundation. It’s no wonder that so much of the tennis world is joining in to wish their condolences for a player who never was a superstar in the sport, but touched a lot of lives as a superstar in her life endeavors.

Prayers and best wishes to her family and friends at this time of loss. The tennis world is like any other part of life, over time those we care about slip away. Time passes by. But it’s especially sad when a player who was only 30 and had just been married is so quickly taken from the community. I wish her soul peace on her journey. Bally will be missed by many. 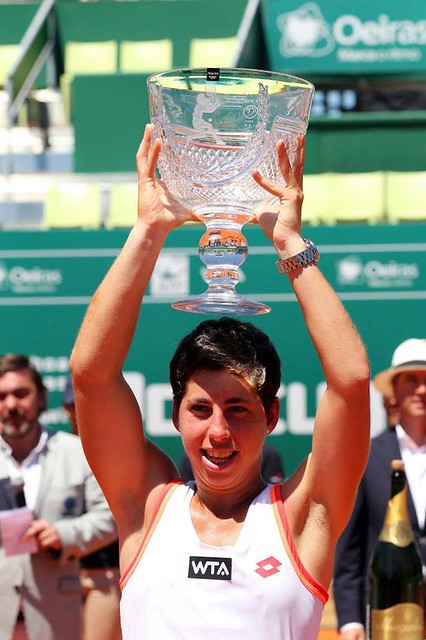 After writing about Bally’s passing, the games on-court seem trivial so I’ll keep this brief. A big congratulations to Carla Suarez Navarro on winning her first WTA singles event after coming up short in 5 previous finals. 6th time was the charm at the 2014 Portugal Open (Oeiras). It was her third final in Portugal. All of her final appearances have been on clay. And speaking of the clay court season, the first big tournament is underway in Madrid with Serena Williams, Maria Sharapova and Ana Ivanovic all advancing in the first round.