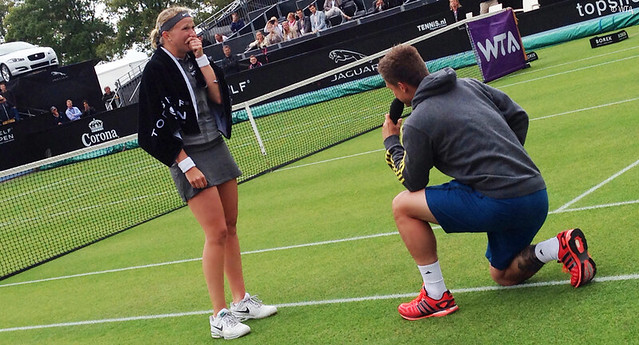 Michaella Krajicek was a 2-time winner in the first round of the 2014 Topshelf Open. Not only did she defeat Jana Cepelova, the player who upset Serena Williams at the Family Circle Cup earlier this year, she also accepted a marriage proposal from boyfriend and ATP player Martin Emmrich. The 25-year old Krajicek is a 3-time singles and 5-time doubles winner on the WTA. She was once ranked as high as 30th in the world but has slipped out of the top 200 recently with a variety of health issues. She is also the younger sister of 1996 Wimbledon Men’s Singles champion, Richard Krajicek. Michaella was a quarterfinalist in singles at Wimbledon 2007. Best wishes to her and her fiancé. Relationships on tour can be tough to maintain. I wish them only the best.