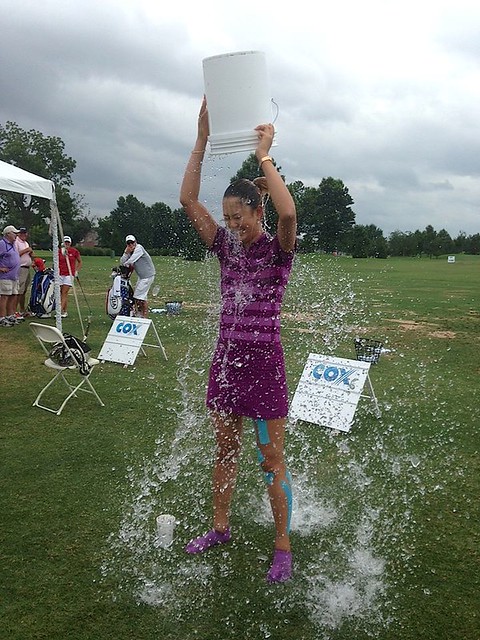 Ok, let’s get this out of the way right from the beginning. I know Michelle Wie has been on fire lately but…

Following her breakthrough win at the 2014 US Women’s Open, Michelle Wie was quite a busy champion. Television appearances, radio call in shows, Empire State Building photoshoots, she was in demand. Had she come into the 2014 Walmart NW Arkansas Championships exhausted mentally or physically, it would have been completely understandable. Who knows, maybe she is tired. But if so, she hasn’t shown any negative effects as her sizzling play continues. Through two rounds, she’s posted 11 birdies against a lone bogey to lead by 2 shots at 10-under over So Yeon Ryu. Most of the players had finished their rounds before a strong storm hit and suspended play. So the leaderboard could change tomorrow morning after those players with holes still remaining in the second round finish. Regardless of whether Michelle is still in the lead when the final round starts, the fact remains she will be difficult to beat Sunday if she continues her hot play. She still hasn’t three putted since before the start of the US Women’s Open. Over the last few years, putting has been her biggest flaw. If she has solved that riddle permanently the rest of the LPGA tour players are in trouble.

Some of the big names near Michelle are Suzann Pettersen, Stacy Lewis and Chella Choi. But the player I’m watching is So Yeon Ryu. Chella Choi is probably a better story since she’s played so well yet hasn’t won yet on the LPGA. Great story with her and her father. However, I just feel Ryu is due. She has played very well this year, finishing in the top ten 7 times with a T11 added for 8 top elevens. She seems to put herself in great positions but come up short. She has two LPGA victories, but the last one was in August of 2012. She was runner-up in Arkansas last year, losing a playoff to fellow countrywoman Inbee Park. I don’t know if she can catch Michelle if Wie puts in another 5-under 66 (par is 71 here) on Sunday. Whether it’s this week or not, So Yeon seems destined to return to the winner’s circle soon.

STANDINGS ARE BASED ON POSITIONS AT TIME OF PLAY SUSPENSION