20-year old Canadian Eugenie Bouchard has had a breakout season in 2014. She won her first WTA title at the Nuremberg Cup. Genie also reached the semifinals of the first two Majors of the year, the Australian Open and Roland Garros. Before getting to the semis, Bouchard needed to get to the quarterfinals. For the third straight Major, she’s done just that. Taking on Alizé Cornet, twice the conqueror of Serena Williams in 2014 including one round ago at Wimbledon, Genie was able to edge out her French opponent over two tough sets, 7-6 (5) 7-5. This was an impressive match from Bouchard in that she didn’t come out and run Cornet off the court. As Serena has discovered, Alizé is one tough out. She’s a fighter and doesn’t mind the drama or pressure. If Genie wants to get to her third straight Major semifinal, she will need to go through either Maria Sharapova or Angelique Kerber in the quarters. It’s unlikely that Bouchard will be able to blow through either of them. It is more likely that it will be a tough match against either player, one where Genie will need to handle big points better than Masha or Angie. 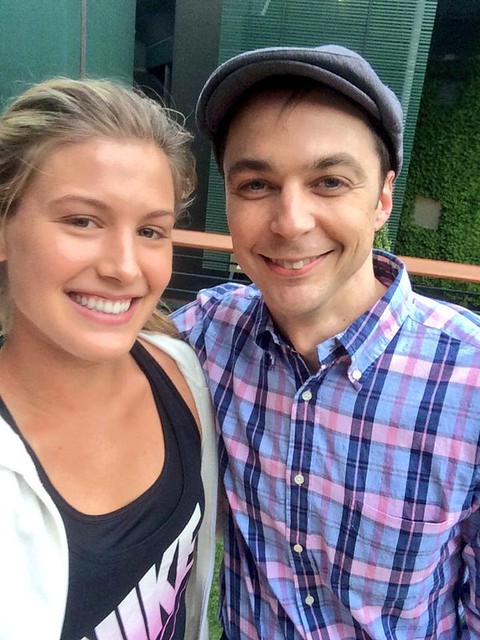 The Big Bang Theory actor and 3-time Emmy winner Jim Parsons, who plays Dr. Sheldon Cooper on TBBT, gives his thoughts on Eugenie Bouchard. I completely agree with Jim Parsons. Eugenie is most like Chris Evert. She isn’t the next Maria Sharapova. Like Evert, Genie is a cold-hearted killer on the court. And that’s a good thing. A very good thing. Parsons is an avid tennis fan, which you can tell by this video. The Big Bang Theory has another tennis connection as Kaley Cuoco-Sweeting, who plays Penny, is married to tennis player Ryan Sweeting.

Ana Ivanovic announced herself as a potential threat at Wimbledon 2014 by winning her first grass court title at the Aegon Classic. Perhaps some of us forgot that Sabine Lisicki announced how good she could be on grass by reaching the Wimbledon final last year as well as how she’s done in previous years. She had Ana on the ropes a set down Saturday evening before darkness halted the match. Upon resumption Monday morning, Ivanovic looked like she had wrested control away from Lisicki, taking the second set. But Sabine, along with her serve that at one point topped out at 120 mph, absolutely ripped through a dominant final set, winning 6-4 3-6 6-1. Because of scheduling and the break in the match Saturday, Lisicki still has to play her fourth round match against Yaroslava Shvedova for a chance at her fifth quarterfinal in the last six years at Wimbledon. The one year she didn’t make at least the quarters, 2010, was because she missed the event with an ankle injury. I was torn between Agnieszka Radwanska and Caroline Wozniacki as being the women’s player most quietly moving through the draw who could be a potential threat. Both Aga and Sunshine were upset today. Maybe Sabine is that player. Despite her consistent results at Wimbledon and a final appearance last year, on Sunday the Betfair sportsbook had Sharapova, Kvitova, Radwanska, Bouchard and Halep as the top 5 women’s picks. With Aga gone, maybe they’ll make room for Sabine.