Ok, a quick results recap of day 4 at the 2014 WTA Finals. Caroline Wozniack (2-0) d. Agnieszka Radwanska (1-1), 7-5 6-3. Petra Kvitova (1-1) d. Maria Sharapova (0-2), 6-3 6-2. Serena Williams (2-1) d. Eugenie Bouchard (0-3), 6-1 6-1. Here’s what is most interesting to me, the advancement scenarios. Because of percentage of sets/games tiebreaker scenarios, if Genie won at least 1 game in her match with Serena, Simona Halep (2-0), who plays her third match Friday, would be the first to advance to the semifinals round. Genie won the first game of the match, but only one more after that as Serena ran her off the court. If Simona wins her match Friday against Ana Ivanovic, Serena will join Halep as the two qualifiers from the Red Group. Also, if Ivanovic defeats Halep, but takes 3 sets to do it, the tiebreaker rules would allow Serena to advance. However, if Ana beats Simona in straight sets (2 sets to zero), Halep and Ivanovic would advance from the Red Group and Serena would be eliminated. Hmmmmm…it might not be the most honorable move, and Simona did beat Serena already here, but giving Serena another crack at it might not be in Simona’s best interests…or anybody else in the draw. Maybe Simona should go out…compete, but maybe take a little vacation. Not overtly. because you don’t want to be accused of throwing a match…that’s a no-no. But since she’s already advanced, why exert herself too strenuously when winning or even losing in 3 sets doesn’t benefit her and allows the best player in the world into the knock out round? Here’s how the White Group shakes out:

After that, the scenarios get more complicated, so here’s a graphic: 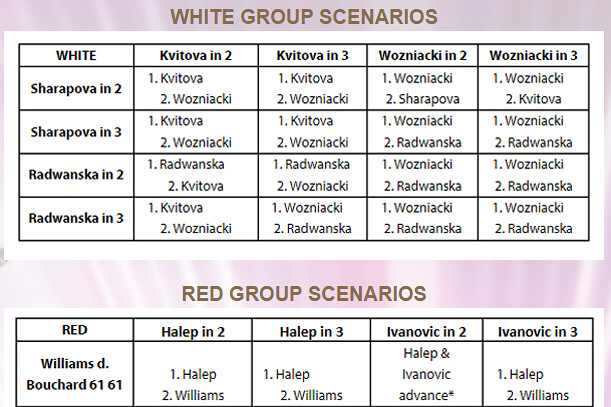 Congratulations to Petra for winning the 2014 Diamond Aces award, awarded to the player who most promotes the tour on and off the court!