For me, a lifelong tennis fanatic, this is the most wonderful time of the year. Wimbledon? Sure, I’m not unaware or dismissive of the sport’s ultimate prize. But it’s not at the top of my list. Even my LPGA fandom didn’t move me to look too hard at the United States Solheim Cup announcement today. Right now, it’s all about my favorite sporting event (outside of the Summer Olympics), the US Open. There will be a lot of sponsor events this week leading up to the fortnight, so it’s fitting that one of the biggest brands in sports, Nike, pulled together an “NYC Street Tennis” event that featured some of the biggest past and present stars in the tennis world. In fact, some of these stars aren’t so warm and fuzzy with each other. Maria Sharapova and Serena Williams…quite a chilly pair with each other. I don’t know how Masha is with ex-boyfriend Grigor Dimitrov, but they didn’t seem too close in the pictures. Nick Kyrgios? Seems everybody is cross with his antics these days. Eugenie Bouchard is very open about not wanting to make friends on tour. Let’s not even get into the complicated relationship between Pete Sampras and Andre Agassi. Ultimately, Masha said it best: 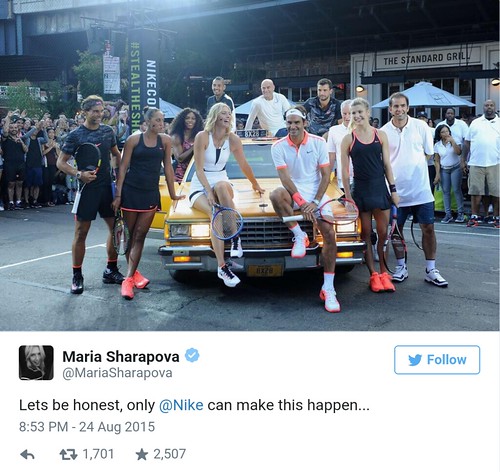