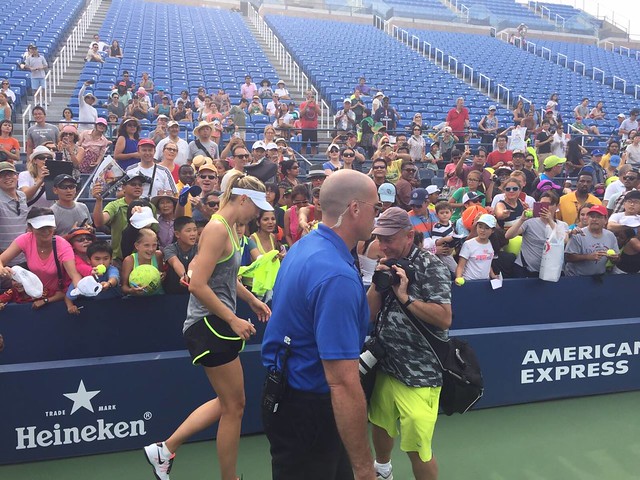 As Maria Sharapova left her Louis Armstrong Stadium practice session at the Billie Jean King National Tennis Center, she knew something her adoring fans did not. She didn’t feel good about it, but it was apparent to her that she would not return in 2015 to the place where she was a singles champion in 2006. The #3 seed (behind only Serena Williams and Simona Halep) withdrew from the US Open citing the right leg injury that has sidelined her since Wimbledon. I will miss Masha at the Open this year. Sure, there are others regarded as having a better shot to win, but it’s sports…you never know. The expected often happens, but doesn’t alway happen. She shared her feelings afterwards on her website and on Facebook:

The clock has hit 4:17pm on Louis Armstrong. I just sat down on the chair, but my eyes are fixed on this little kid, twitching impatiently next to his mom, is she finished already, I have this big fat tennis ball I really really need her to sign and my ice cream cone is melting.

He is one of the couple hundred people watching my practice on the eve of this US Open. It’s remarkable. I ask my coach to take a panorama picture, it’s not one for the frame though. I am surrounded by families, their kids, grandparents. Somewhere in the mix, might even be the coach of my next opponent, scouting. Don’t waste your time, it won’t be me.

Back to the kid, I just want to whisper in his ear, “I am not only finished with practice, but my 2015 US Open is finished without any beginning”. It’s my little secret but I don’t want to let anyone down.

I don’t want to get up from this chair, but I know this is the end of my US Open campaign. I’ve got these eerie invisible elfs floating around my head, is this really an appropriate time for Harry Potter flashbacks? Come back later please!

I’m smiling now because perspective is charming and just fyi, I’m craving that little boys ice cream cone. Guess I’ll just have to find my way through midtown tonight, in search of that annoying truck melody.

In the meantime let’s celebrate what we already have and not what we are missing.

New York City, this wasn’t my year but I will be back!