Garbine Muguruza has added to her breakthrough year by advancing to the semifinal round at the 2015 WTA Finals with a 6-4 4-6 7-5 victory over 2011 WTA Finals champion Petra Kvitova. Gabi had to come back from 2-4 down in the final set to finish unbeaten at 3-0 in White Group round robin play. It’s the Spaniard’s (by way of Venezuela) first ever WTA Finals in singles (she has played doubles). Despite being a novice in terms of experience, Muguruza still emerged as the best player through in the White Group at these finals. She will go on play the #2 finisher from the Red Group, Agnieszka Radwanska. That’s an intriguing match-up as Aga has a way of diffusing the explosive shots of big hitting opponents like Gabi. If Muguruza wants to win this battle of former Wimbledon runners-up, she will need patience as much as power, lest Radwanska bait her into rushed, unforced errors. Garbine has a 4-2 head to head advantage over Aga, with all four wins for Gabi coming this year. Still, 3 of those 4 Muguruza wins came in tough 3-setters, so Aga has been right there with her in those matches. 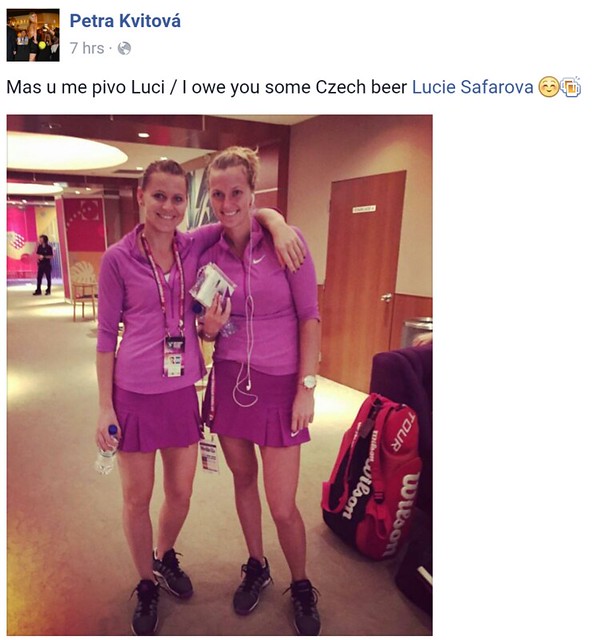 Although she fell to Garbine Muguruza and finished with a 1-2 record in round robin play, Petra Kvitova still advanced to the semifinal stage. She needed her great friend and countrywoman Lucie Safarova to beat Angelique Kerber in straight sets to leave her, Lucie and Angie all at 1-2. If a straight sets Lucie win came to fruition, Petra would advance due to tiebreaker rules. That’s exactly what happened as Lucie took down Angie, 6-3 6-4. Petra will face the top finisher from the Red Group, Maria Sharapova. Masha holds a 6-3 head to head advantage against Kvitova. However, Petra did record one of her 3 wins against Sharapova at last year’s WTA Finals.