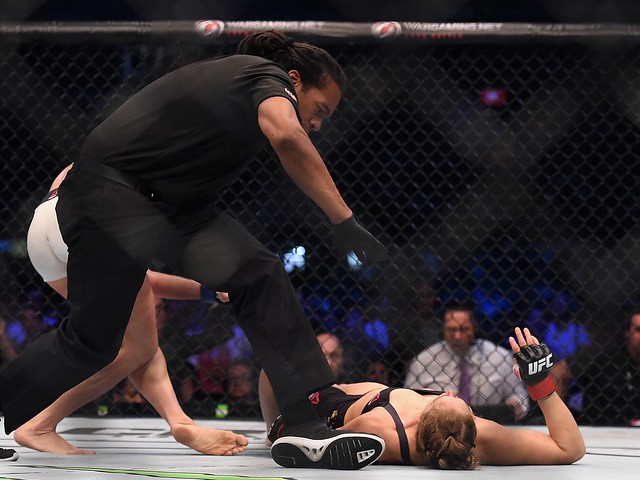 Stubborn. There are a lot of words to describe Ronda Rousey. Talented. Powerful. Fierce. Confident. Champion. Well, she’s no longer the UFC Women’s Bantamweight champion after being knocked out by Holly Holm at UFC 193. With all due respect to Holly, the focus of my post will be Ronda. There will be plenty to say about Holm in the coming weeks and months as a rematch seems all but inevitable. But the sports world is buzzing because the seemingly invincible Rousey was thoroughly and completely outmatched. This wasn’t some flash knockout where it was a close fight or Ronda was winning and was caught by a big shot. From the opening bell she was bloodied, bruised and beaten. This is not revisionist history. I told anybody who would listen to me that Ronda would be knocked out. 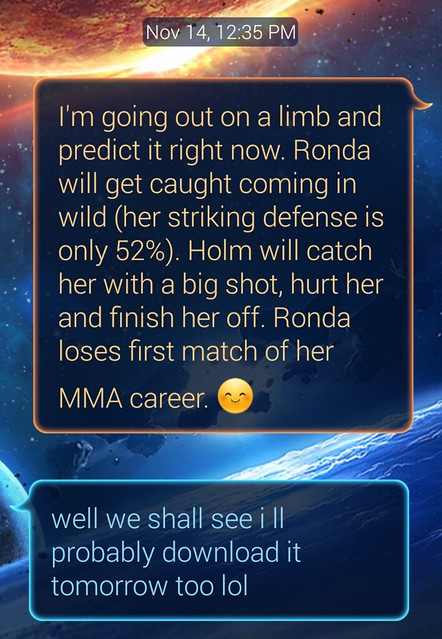 I felt that fighters like Miesha Tate showed that Ronda was susceptible to being hit. Rousey often “drops” her hands after throwing a punch. She doesn’t move her head side to side. She stands too straight up. Ronda, while being the best on the ground, is just not a very good boxer. But unlike Miesha, Holly Holm would stay off the mat and be disciplined, whereas Miesha squandered her advantage by trying to shoot and take down Rousey. As I said, Ronda’s striking defense was only 52%. Add that to the fact that Holly, a multiple boxing Female Fighter of the Year winner, was the most dangerous striker she ever faced in the Octagon…it’s a recipe for disaster. Then there’s that word I used to describe Ronda: stubborn. I just had a feeling that Rousey is so confident…so overconfident…about her abilities as a fighter that she would try to box with a world champion boxer. Training with the great Lucia Rijker isn’t the same as being in the ring against somebody in their prime trying to take your head off. Holly just picked Ronda apart with an assortment of left hands and elbows. She even threw in some oblique kicks. Ronda made the terrible mistake of chasing a tall boxer with a better punch. She seemed desperate, at one point throwing a wild haymaker punch that ended up with her connecting with nothing but air, falling and stumbling into the gate as Holly slipped the blow like a pro. 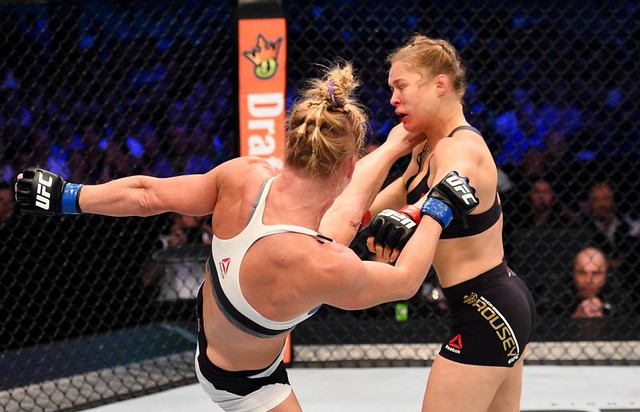 The Kick Heard ‘Round The World (click to enlarge)

Everybody will talk about the kick that ended the fight (yes, Holly threw a few more punches with Ronda on the mat, but Rousey was already done). However, it was yet another left hand that hurt Ronda, causing her to put both hands on the mat before bouncing back up, before the kick. Not only was it a mistake to try to box with a world champion boxer, but this was also a southpaw boxer. Even professional boxers have to adjust for southpaws. For somebody like Ronda who only in recent years started serious boxing training…she just can’t stand and trade strikes with Holm. I know Holly was using her movement to keep Ronda both at a distance and chasing. Still, in a rematch I can’t see Ronda not changing her approach and working on ways to get in and try to shoot. But then again, Ronda’s ego might be so bruised right now that she will want to show the world that she can beat Holly at her own game in a rematch. Like I said, she’s stubborn. 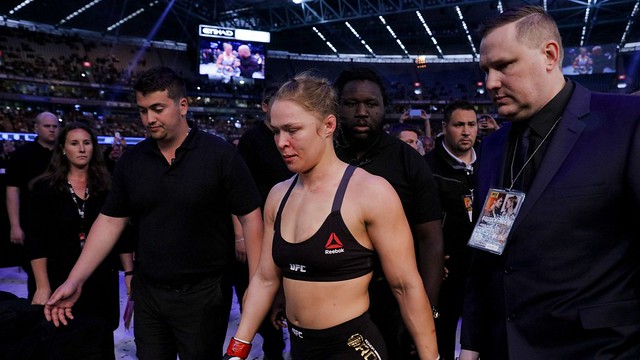 You just knew it would happen whenever Ronda suffered her first loss…and in MMA even the greatest fighters suffer multiple losses. The people who were often in Rousey’s verbal crosshairs are now having their day. The fans who at one time liked her brashness but grew tired of her arrogance are now celebrating. I have no problem with either side. Sure, one could choose to be the bigger person right now. I would choose to do so. But if somebody chooses to go after Ronda verbally now, that’s fine. If you dish it out, you have to be able to take it in return. Things like not showing sportsmanship with a simple handshake, well…it’s Ronda’s choice. Just know she’s going to get that work from people when the tables turn. Miesha Tate and Cyborg, probably Ronda’s two biggest targets, are coming at her today. Let them have their say. Rousey certainly spent lots of time talking smack about them. 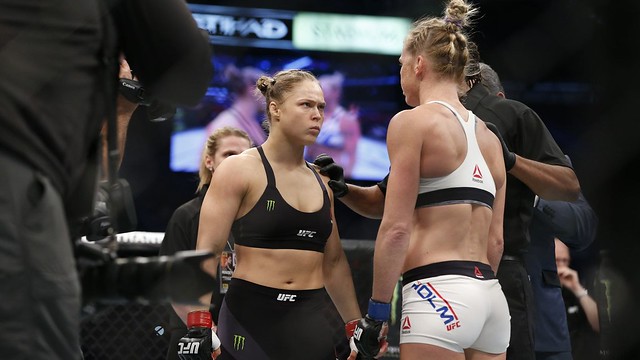 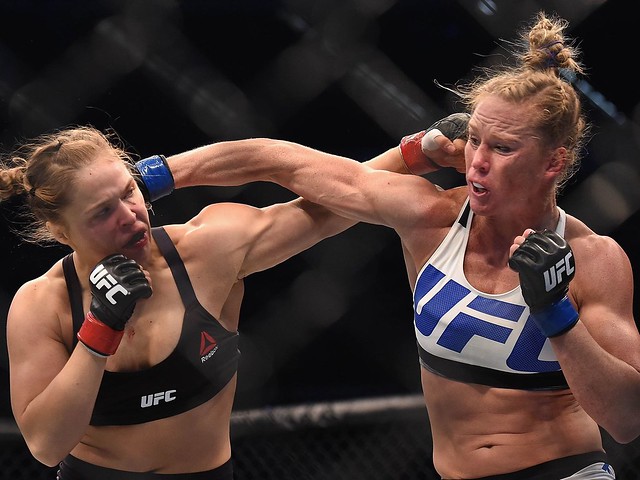 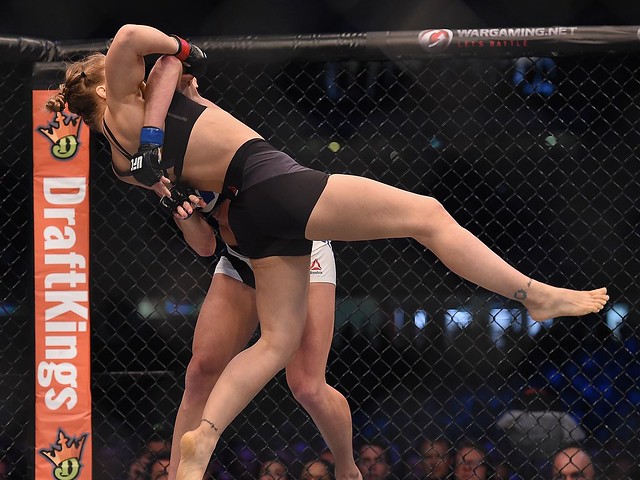 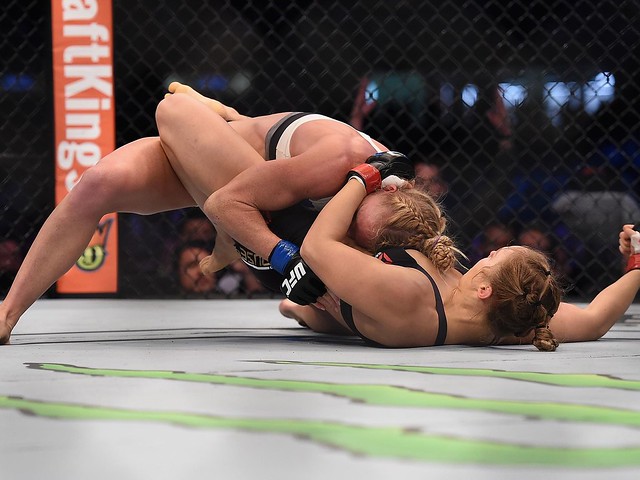 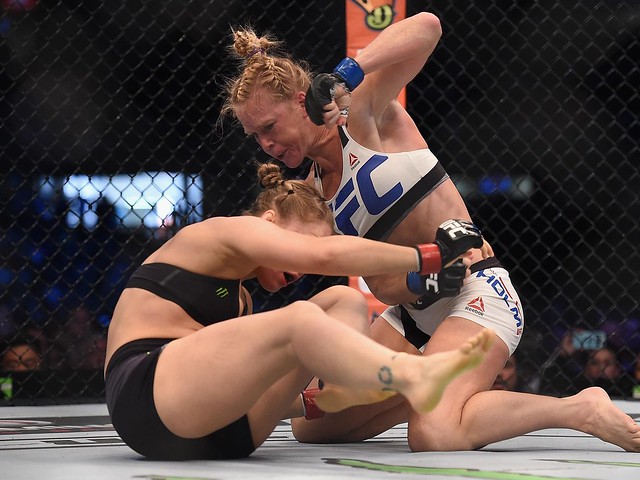 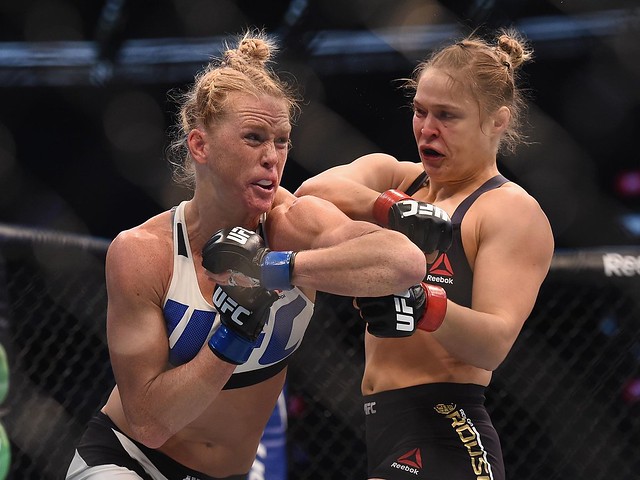 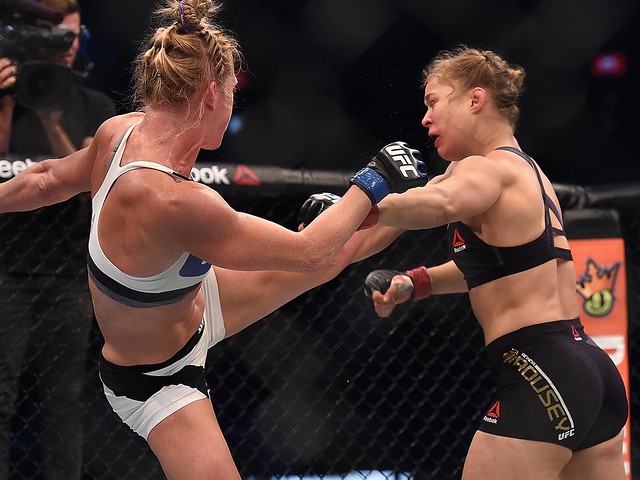 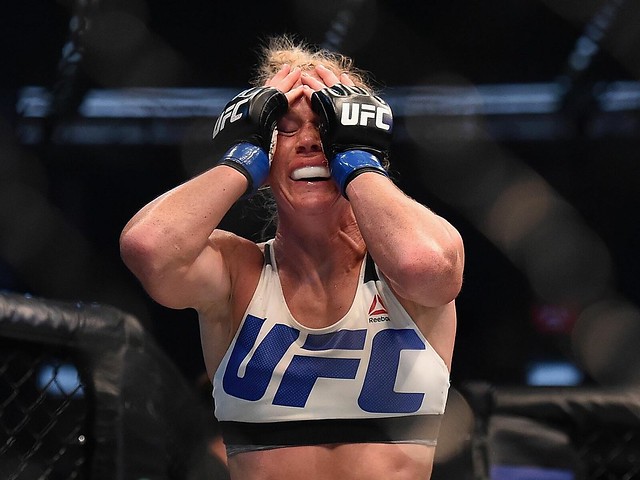 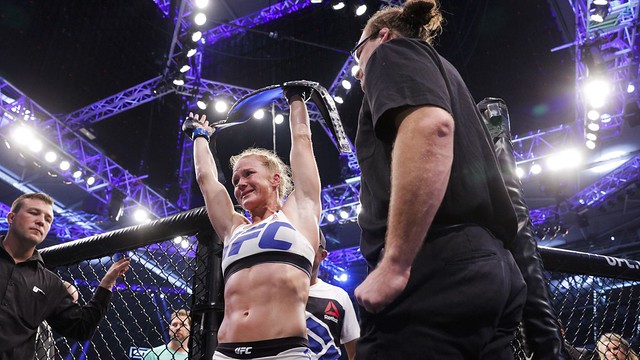 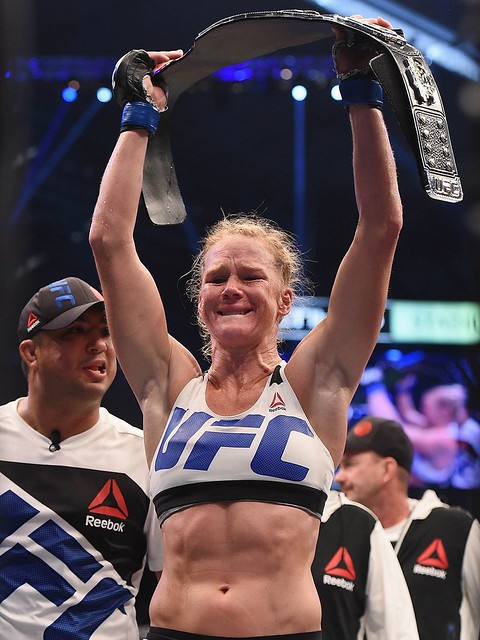