On paper, the 2016 Australian Open third round match between Madison Keys and Ana Ivanovic looked like a tight contest that could go either way. That’s exactly how it played out as Keys came back from a set down and being down a break several times, including 0-3 in the final set, to outlast Ivanovic, 4-6 6-4 6-4. There were not a lot of long artful rallies. This was power tennis by two of the streakiest players on tour. But watching it all unfold, I felt Maddie had more pop on her biggest shots, but Ana was a bit craftier and spent most of the match playing with a lead. If Keys could just pull even I felt she would right the ship. Eventually, she did. I am extremely impressed with how Maddie has battled back in her matches this first week. The road to being a champion isn’t always a smooth one. She is demonstrating a growing ability to better deal with adversity when the lights are shining the brightest. 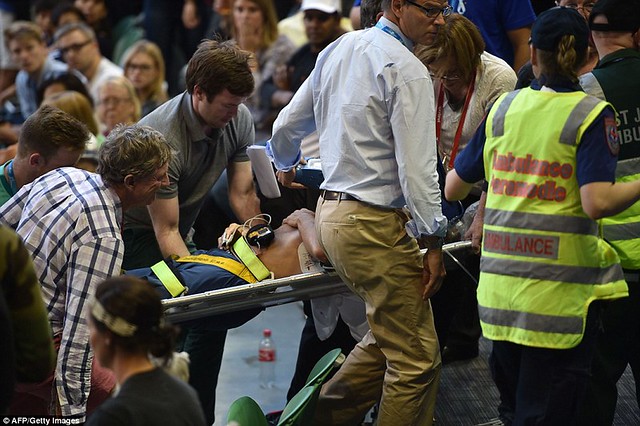 Nigel Sears Taken Out Of Stadium To Hospital

I can’t talk about this match without mentioning that after the first game of the second set, Ana’s coach Nigel Sears collapsed in the stands. Apparently, he has some medical issues. Let me be clear that everything I am saying is what just what was being said on the broadcast live while the Keys v Ivanovic match was being delayed nearly an hour and during the resumption. It was speculated that a defibrillator was used on Sears and he was hooked up to oxygen on the way out. I don’t know if that’s true but in the pictures of him being taken away he has his shirt removed. Watching it unfold, there was a group of medical staff and security around him so it was difficult to see anything that was happening. Sears is not only Ana’s coach, he is the father in law of Andy Murray, who was playing a match in Margaret Court Arena when this was happening in Rod Laver Arena. Sears’ daughter, and Murray’s wife, Kim Sears, is expecting her first child. It was reported that Nigel Sears had regained consciousness and was alert, sitting up in the hospital. Hopefully, they will pinpoint why he has been sick and set him up on the correct treatment plan. Ana was clearly shaken during the episode. However, once play resumed Ana looked fine. This was not why she lost. Ana didn’t give this one away, as she has done plenty of times in the past. Maddie took it from her.

And now I have a conflict. Madison Keys is my favorite active player. But what ZHANG Shuai has done this Aussie Open, being 0 for her career in Majors, never having won even one singles match, has warmed my heart. I want Maddie to win this tournament, whether that actually happens or not with Serena and Vika playing scary tennis. But I also don’t want to see Zhang Shuai’s run end in her fourth round match against Keys. I guess I’ll root, as always, for Maddie, but should she lose I’ll be less upset than if she had lost to anybody else in the draw. I’ll say this: be clear, Zhang can beat Keys. She’s run through #2 seed Simona Halep, 2016 Hobart champ Alize Cornet and tricky Varvara Lepchenko all in straight sets. These are not flukey wins. She has shown why she was once a rising player on tour. With her size and groundstrokes I can only surmise it has either been a lack of preparation or the mental/psychological side of the game that has held her back. She clearly has talent. That is evident. The talent to beat Keys is there. However, in her run Zhang Shuai has not faced anybody with the kind of firepower on her shots like Maddie. If Keys is on her game, she could simply hit Zhang off the court. But if Keys is overly streaky again, she would be in danger of leaving an opening Zhang could exploit.