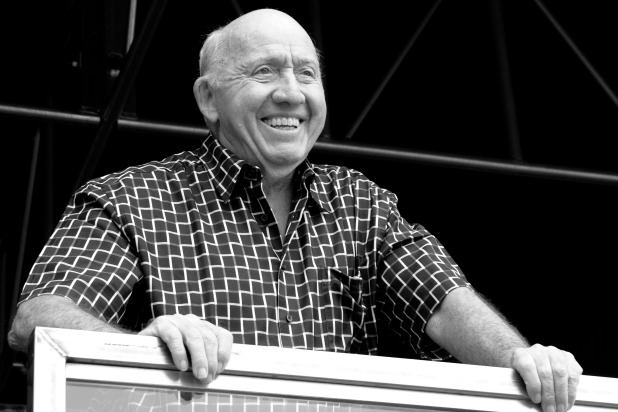 After the Australian Open, I took a bit of a break from tennis and golf blogging and forums, then I became sick just as I was ready to resume. Now recovered, I was going to start posting at the conclusion of this week’s JLPGA event. Unfortunately, sad news from the world of tennis hastened my timetable. Bud Collins, one of the greatest tennis journalists, one of the greatest sports journalists, has passed away at the age of 86. A National Sportscasters and Sportswriters Association and International Tennis Hall of Fame member, Collins also covered other sports, including boxing where he was an early chronicler of Muhammad Ali, then known as Cassius Clay. Although he referred to himself as a hack, he was a skilled player in his time as well, winning a US Indoor Mixed title and reaching the final of the Roland Garros Senior Doubles. While known for his flamboyant dress, make no mistake, Bud Collins was an encyclopedia of tennis knowledge. He had great style, but it was also backed up by unmatched substance. So great was his impact as a tennis sportscaster, the USTA named the media center at the US Open in his honor.

The tennis world, insiders and fans alike, have flooded social media in the past 24 hours to say what Bud Collins meant to them. To me, he was an accelerant. In the late 70s and early 80s, I was a child who had his love for the game sparked by my godmother and a stepmother. But that was the introduction. Something greater was flickering down deep. I was a fan of boxing, baseball, basketball and football, but something about tennis drew me in. I would turn on NBC and see Bud Collins. Sure, he was over the top with his passion and enthusiasm…and his pants…oh, those crazy pants. But I got him. I understood him. Although not nearly as demonstrative as he was, inside I was that same fanatic about the game. Using players today as an example, there are some who say they are tennis fans but upon further questioning they really only follow a couple of players. If Serena Williams or Venus Williams isn’t playing, they aren’t watching. If Roger Federer goes out early, they lose interest in a tournament. If players who grunt/scream like Maria Sharapova and Victoria Azarenka are playing they won’t watch. Some say they prefer the grace and style of the game before all the booming serves and baseline bashers. I am more like Bud Collins. The game itself is the passion. Whatever era, whatever players, I’m in. Sure, I’d like to see the big names in the big matches. However, I get jazzed to see a final between Carla Suarez-Navarro and Jelena Ostapenko as well. They played a sensational final in Doha recently, but I bet a lot of so-called tennis fans paid no attention. It’s tennis. It’s TENNIS. IT’S TENNIS!! If tennis were a corporeal being, if the game itself were somehow incarnate, I would throw my arms around it. That’s what Bud Collins did. So as a very young tennis aficionado, his demonstrative passion fanned my tennis spark into a flame. It’s been burning ever since. Thank you, Mr. Collins, for being a mirror of how I feel inside about tennis. May you rest in peace.