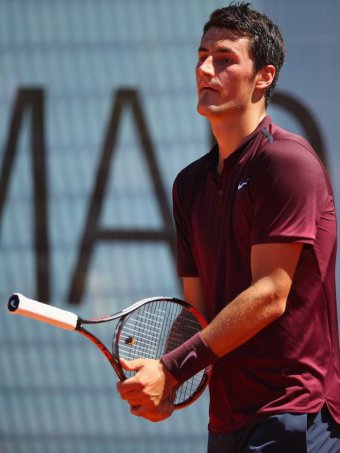 Ok, I get it. Bernard Tomic was down 2-6 4-5 0-40 match point when he farcically turned his racquet around and didn’t make any pretense of trying to return serve in his 2016 Mutua Madrid Open match against Fabio Fognini. I also know Bernard would probably rather be anywhere else than sliding around on clay. He despises the surface. That said, two things really rubbed me wrong about this. Firstly, Tomic has a history of tanking, so much so that he has been labeled The Tank Engine. This is not a one time thing I would write off as a moment of silliness from a 23-year old. Secondly, and more importantly, given that history…dang it, respect the game. Unless you are injured and fighting through to get to the end, go out there and try. Maybe he hates clay and hates losing early to a player he probably has more raw talent than…but you know what he loves? He loves those checks he gets to cash from tournaments. He loves those sponsorships and the money that comes with them. He loves being able to live the kind of privileged celebrity life a lot of people who work 9 to 5 jobs only dream of living. If he doesn’t love those things, then get out and do something else. And if he doesn’t love tennis and only plays because he has a talent for the game, I understand. There have been plenty of players that have not loved the game. They’ve been trained to play from an early age and that’s all they know. But regardless, respect the game. Don’t take the rewards that tennis has to give if you aren’t willing to at least give respect back.

One thought on “Dropshot: Return of Tomic the The Tank Engine”