What I know for sure is that Ariya Jutanugarn is the winner of the 2017 Manulife LPGA Classic. Whether that propelled her to world #1 on the Rolex Rankings…that I won’t proclaim with certainty until the new rankings are published on Monday. After what happened last week, with the multiple proclamations that Jutanugarn would rise to #1 only to have the powers that be blame a “computer glitch” when Lydia Ko held on to the top spot, I’ll hold all predictions.  I can’t imagine what they will say if after only trailing Ko by .01 and then winning, May isn’t the new #1. All signs, and the math, point to Jutanugarn moving to the top of the mountain but everybody is a little hesitant to make the same mistake twice. If…when, let’s say…it happens, May will be the first Thai player to ever be world #1, male or female. She arrived there with a 25 foot birdie putt in a sudden death playoff to beat In Gee Chun and Lexi Thompson for the Manulife title. All three were tied at 17-under after regulation, as Thompson squandered what appeared to be sure victory with a quartet of bogeys on the back 9. It’s the first win of the season for Jutanugarn, the reigning LPGA Player of the Year, as well as her first win in a playoff. She has 6 wins since May 2016, including a Major. Now all that’s left is to wait on the Rolex Rankings to be calculated. 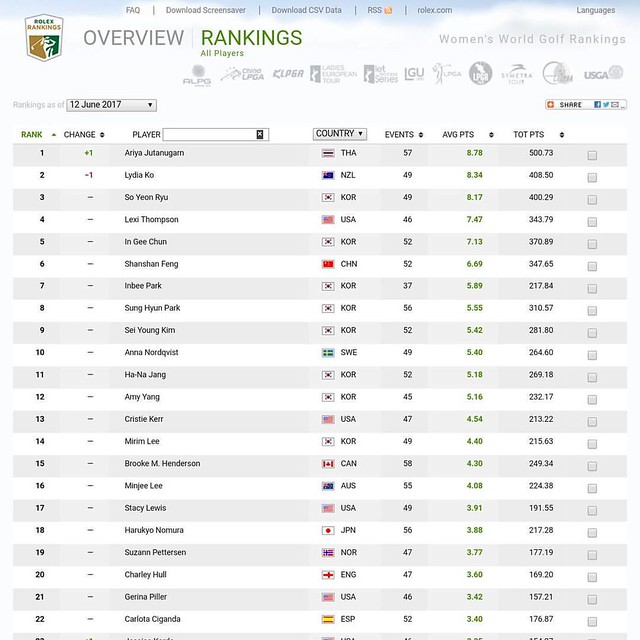 LEADERBOARD (Players who made the cut)